"We, the lost children" by Benjamin Kane Ethridge 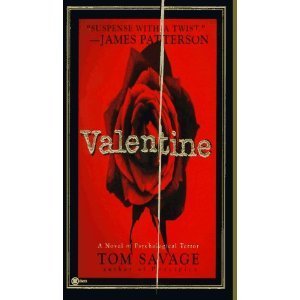 Valentine - The Novel
We, the lost children
By Benjamin Kane Ethridge

I discovered Tom Savage back in the late 90s during the dismantling of all book sections in Wherehouse Music stores. The liquidation made for incredible deals. One or two dollars on paperbacks, maybe five for a hardcover. I was in bookworm heaven. I discovered many new authors through this windfall, and because I’d come by them so easily, I felt bonded to the titles, a pirate with his chest of ill-gotten doubloons.

Tom Savage, not to be confused with the Western author of the same name, was a mystery and thriller writer. Hollywood made a movie I never watched (the reviews were enough to sour my desire) based on his superb slasher-thriller Valentine. It’s my favorite book of his— well, an eyelash away from The Inheritance— but the point is, I read all of Savage’s works and enjoyed them to the core.

I was floored in particular by Valentine though. Great suspense. Great structure. Great twists and turns. Great book. It was so well done I let all my family and friends borrow it. Man, how they read this book and quick! My girlfriend, later to become my wife, read it in two days and she doesn’t ever read fiction. Ever. Did I mention ever?
The paperback’s spine was in absolute shreds.

Seeing how this novel was gobbled up reinforced to me that a writer can pull even the most unlikely audiences into his or her den. So what happen next completely puzzled me…

Despite Savage’s word wizardry and power, just around the turn of the millennium he abandoned fiction. Now, I don’t know if I can make that statement completely in earnest, but according to Amazon all I find is a trail of children’s textbooks with an occasional 1990s murder mystery peeking out between the titles. This was confusing to me and, thinking more on this, I decided perhaps my infatuation with Savage’s writing was the reason for this confusion. He must have been a very well kept secret that I had the rare privilege in knowing.

I looked online and found countless forums of fans, not legions to be sure, but the man had a following. People who loved his stuff— loved it the same way I did. So why did he leave? Did he do it just for money only? Textbooks pay mightily more than fiction, so there’s that. But that’s a boring reason. Money? Bah. Hey, but speaking of boring, maybe it was that. Maybe the departure from fiction stemmed from boredom or lack of ideas? His book Scavenger, though effective when held against most thriller writing, was not classic Savage. Yet, even for a dud, it was pretty good.

Whatever the excuse, nothing jives for me. A decade has passed now for cripes sake… wouldn’t you think Tom Savage would want to write another novel for his adoring fans?

It’s very possible I’m still mired in my own idol worship, a victim and perpetrator of the “love me” syndrome many writers have. We crave people to enjoy and adore our stories. The writer who writes only for herself is a loathsome beast in our eyes. Share. Why don’t you share, Miss Stingy?! When they politely answer, “Nah, no thanks,” it’s an awfully slippery idea to wrap our minds around.

But it doesn’t stop with Savage. Another of my favorite writers, Thomas Ligotti, has also merrily skipped down the trail, leaving that shadowy storyteller forest behind him, no care to even glance back (I assume forever, but hope I’m wrong).

The transgressions of our literary heroes, at least in regard to what is or is not on the page, can crumble the heart at times. It’s taken me a while to find out why; the love-me factor mentioned earlier is a prevailing step in that direction, but not the cut and dry answer.

Barring death, which still forces unimaginable dreams of what might have been, we can come to accept why new books cannot be born. However, with those writers whose hearts still beat and whose lungs still breathe air and whose fingers are still perfectly capable of pushing keys on a keyboard… I personally see this evasion as a form of cruel punishment, and surely I’m not the only one.

We need (please, please) these artists to come back with more of their art. But why does it matter? Why can’t we shrug and say, “Well, I’m just happy with what I have?” What real difference does it make?

You will seldom find a child content spending a decade with wonderful parents, only to be later turned out to the cold world, alone. And my gripe with AWOL writers is exactly the same. We the readers have been orphaned. Feeling childlike again, full to bursting with wonder, these storytellers were the surrogate parents to our imaginations, if for a short time. Now, with their most careless escape, we wander the real estate they claimed in our hearts, hoping to find more territory. Because, well, we must find out how the untold stories really end.

It screws with us.

It screws with me, anyway.

What can a reader do about this, though? Grin and bear it? Grit our teeth and pout? Neither will help. There are many other authors to discover— but really now, that relationship will be different, won’t it?

Anyhow, melodramatics aside for a second or two, if Tom Savage ever does write another thriller, I have a plan. When and if I walk past the new novel in a bookstore, I will stop, glance at the blood speckled cover and huff. Where were you when I needed you? I will continue to shop, head held high, nose tilted at a proper angle.

And then, later, I will subconsciously find my way back to the bookshelf and pretend to be surprised. As soon as I determine nobody is looking, I will snatch up the book and crush it over my heart. Breathe in the fresh pulpy air.

So glad to be home again.

Benjamin Kane Ethridge is the Bram Stoker Award winning author of the novel BLACK & ORANGE (Bad Moon Books 2010) and BOTTLED ABYSS (Redrum Horror 2012). For his master's thesis he wrote, "CAUSES OF UNEASE: The Rhetoric of Horror Fiction and Film." Available in an ivory tower near you. Benjamin lives in Southern California with his wife and two creatures who possess stunning resemblances to human children. When he isn't writing, reading, videogaming, Benjamin's defending California's waterways and sewers from pollution.

Say hi and drop a line at ben@bkethridge.com