"Are We Heading for a Zombie Apocalypse?" - Guest post by C.J. West 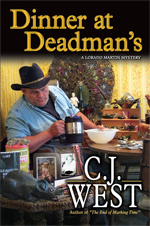 The text you type here will appear directly below the image
(Another in my continuing series of guest blog posts, giving different voices and ideas the opportunity to speak their minds. In this piece, author C.J. West gives his take on the legalization of drugs and what it might mean. WDG)

The title of this blog may have you thinking about the recent cannibalism events in the United States. And you may love The Walking Dead on television or even the movie Zombieland and you may be conjuring Hollywood’s version of flesh-eating zombies. I’m personally a fan of the movie and the television series, but I’m not writing about infected, mindless people roaming the streets.

What I’m really talking about is something I heard over and over from the real life hero in my Lorado Martin Mystery Series. He often talks about the Zombie Apocalypse as a metaphor for a rising tide of drug abuse and crime.

Lorado works with recovering addicts and sees firsthand the toll drug abuse takes on people. Families are splintered apart as trust between spouses, brothers, even children and parents is shattered by lies and deceit. Many of these relationships can never be truly mended. Users rack up criminal records so long they can never hold a position of responsibility. Many lose their right to vote. When they finally get clean, many recovering addicts are resigned to life as second-class citizens. Portraying their struggles in Dinner At Deadman’s was heartrending work.

Why this happens and why the Zombie Apocalypse tag is so fitting is because some people are so powerless to hard drugs they have no choice but to feed their addiction at all costs. They mindlessly wander in search of money for their next fix, like the walkers in The Walking Dead, scouring the world for their next meal.

Lorado says that movie makers have been using zombies as a metaphor for drug users for years and that the population at large has yet to catch on. Whether you believe him or not, the push to legalize addictive drugs is more scary than any zombie movie.

Thirteen of fifty states have decriminalized marijuana. Politicians as disparate as Ron Paul and Rev. Jesse Jackson are calling to end the war on drugs. Senator Paul sees the drug war as an infringement on individual liberty, while politicians from the Congressional Black Caucus like Rep John Conyers see the war on drugs disproportionately targeting people of color. Actor Brad Pitt calls the war on drugs a charade.

With so many voices calling to legalize drugs, we have to wonder what would happen to our young people if they could go to a liquor store and buy heroin when they turn twenty-one. Would a cheaper, regulated source of heroin be any less devastating? Or would we be cultivating a crop of zombies that will roam the earth searching for their next fix?

C.J. West is the author of seven suspense novels including The End of Marking Time and Sin and Vengeance, which was optioned into development for film by Beantown Productions, LLC (screenplay by Marla Cukor). C.J. blogs at www.cjwestkills.wordpress.com. You can also find him at www.22wb.com or at www.facebook.com/cjwestfans
Read More
Be the first to comment