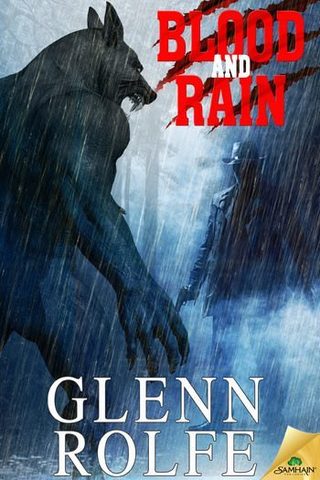 Glenn Rolfe's Blood and Rain (Samhain Publishing)
Werewolves are beasts! They are usually not very pretty, not very nice, and the less CGI the better! When I was asked to come up with a guest post for Bill (W.D.) Gagliani, I knew just what I wanted to do: My Top Five Favorite Werewolf Movies….

I left off some that people love, but that’s because this is MY list. I probably wasn’t impressed or overjoyed by some of your favorites. That’s just how it goes. So, without blabbering too much, here’s my top five!

1. The Howling — This gets the top spot. No questions asked. It’s vicious, it’s sexy (not in a glimmering teen girl/boy way), and it features the BEST transformation scene in werewolf movie history.

2. Silver Bullet — Based on my favorite written work (Stephen King's Cycle of the Werewolf), Silver Bullet was my first cinematic taste of werewolves and is still #2 for me. Corey Haim and Gary Busey are GREAT in this one. Haim’s ramrodding in his suped-up wheelchair? Sweet!

3. An American Werewolf in London — The next best werewolf transformation ever. From the opening scene of the two Americans waking through the foggy moors to the damn terrifying visions that take over, to the eventual full transformation and attacks in the city. Fantastic.

4. The Wolfman (2010) — Even though Benicio Del Toro is playing an Englishman, this one looks fantastic, has an excellent screenplay, and his wonderfully acted. It kept the vibe of one of those spooky old Universal films but with all the modern touches. That’s a feat in itself. Anthony Hopkins and Emily Blunt are great in this one. “I’ll kill you all!!!”

5. Wolf — Jack Nicholson, James Spader, and Michelle Pfeiffer are wonderful in this dramatic, vengeful tale. It is a long movie, but the acting and story are so good you can’t help but get caught up. This movie made me HATE James Spader for years (he’s the best asshole on the planet). It came out in 1994, so it is a bit dated, but still so good.

The light of a full moon reveals many secrets.

Gilson Creek, Maine. A safe, rural community. Summer is here. School is out and the warm waters of Emerson Lake await. But one man's terrible secret will unleash a nightmare straight off the silver screen. Under the full moon, a night of terror and death re-awakens horrors long sleeping. Sheriff Joe Fischer, a man fighting for the safety of his daughter, his sanity and his community, must confront the sins of his past. Can Sheriff Fischer set Gilson Creek free from the beast hiding in its shadows, or will a small town die under a curse it can't even comprehend? One night can-and will-change everything.

Biography, Glenn Rolfe
Glenn Rolfe is an author, singer, songwriter and all around fun loving guy from the haunted woods of New England. He has studied Creative Writing at Southern New Hampshire University, and continues his education in the world of horror by devouring the novels of Stephen King and Richard Laymon. He and his wife, Meghan, have three children, Ruby, Ramona, and Axl. He is grateful to be loved despite his weirdness.

He is the author the novellas, Abram's Bridge, Boom Town, and the forthcoming, Things We Fear (March, 2016), the short fiction collection, Slush, and the novels The Haunted Halls and Blood and Rain (October 2015). His first novella collection, Where Nightmares Begin, will be released in March, 2016. He is hard at work on many more. Stay tuned!

Praise for Blood and Rain

“A major new talent rises from the Maine woods…Rolfe is the real deal, and Blood and Rain is a classic monster novel, full of blood and teeth and the kind of razor sharp writing that makes the pages sing. Small town horror is back, with a vengeance!” –Nate Kenyon, award-winning author of Sparrow Rock, Diablo: Storm of Light and Day One

"With slashing claws and blood-soaked fur, Blood and Rain will have you howling in terror and delight. A welcome addition to the werewolf mythos, and proof that we're in the presence of a rising star in the genre. Highly recommended!" -Ronald Malfi, author of The Floating Staircase

“Rolfe tells a tale that captures your attention like King without all of the wordiness. He also spills the red stuff like Laymon…” – Into the Macabre

“Blood and Rain is a monumental piece of horror fiction. It represents everything I love about werewolves, creature features, siege films, and everything else in between. It is still early in the year, but this is a clear cut candidate for my favorite book of 2015.” — Horror Underground

“Wow! Easily one of the best werewolf books I’ve ever read.” – Hunter Shea, author of Tortures of the Damned and The Dover Demon

“Glenn Rolfe takes a swing at the werewolf genre and hits a home run.” – Russell James, author of Q Island and Dreamwalker

“…not just another werewolf story, Rolfe has managed to take the werewolf to a-whole-nother level…” – Horror Novel Reviews

Stan Springs stared at the curse in the night sky. His curse. He clenched his jaw, and bit back the grunts that demanded release from within his sweat-covered body. His muscles tightened and took turns throwing fits. He could feel his heartbeat’s thunderous barrage at work inside his heaving chest. It was only a matter of minutes before the changes would come.

He ripped his gaze from the clouds, moved away from the window and knelt down next to the bed against the concrete wall. He slipped one shaky hand beneath the mattress and found the small incision he’d made when he first arrived at the institution. He had traded a guard, a heavyset fella by the name of Harold Barnes, his prized Ted Williams rookie card in exchange for a copy of the key. Parting with this gold mine had been necessary. Stan Springs had nothing else of value with which to barter. Harold trusted him enough to make the swap; he told Stan there were crazies here by the dozen, but he could tell that Stan was not one of them.

No, Harold, I’m something far worse.

Key in hand, Stan stepped to the unlocked door and cracked it open. The hallway was clear. He moved down the corridor, as stealthily as during his heydays working on the force in New York. Hearing footfalls ahead and to his left, he fell back and pressed his large frame against the custodial door. Hidden by the entryway’s shadow, he watched Nurse Collins—a tall, thin woman with a dark complexion—pass fifty feet from where he stood, before she disappeared into the nurses’ break room.

Barefoot and dressed in only a Red Sox T-shirt and his sleeping shorts, Stan made a break for the staircase across the hall. His breaths were coming faster now. If he didn’t hurry, he wouldn’t make it outside. He crept down the steps leading to the main hallway.

Through the small window on the stairwell door, he could see Harold Barnes’s haunted jowls illuminated by the laptop screen in front of him. The old man’s eyes were closed, his mouth open. Harold hadn’t even made it an hour into his shift before he was out. Stan knew Harold also ran his own antique shop in the neighboring town of Hallowell. He’d told Stan that working both jobs on the same day, which was sometimes unavoidable, made it difficult for him on the night shift. It was another shared nugget Stan had stored away for nights like this one—the nights the beast in him needed to get out.

Easing the door open, Stan skulked his way along the shadows on the wall, and tiptoed to the main entrance door. Despite the cramps now rampaging through his calves and thighs, he slipped the procured key into the lock, slow and steady. The door clicked open, and he stepped out into the night.

As the cool breeze brushed against the sweat of his brow, the tendons and bones in his face began to shift. The rest of his body followed suit. He dropped to one knee and cried out. His skin, his scalp, his eyes, his muscles were all too tight. He reached behind him and managed to push the door shut.

If you could see me now, Harold.

The private roads out front were deserted. He launched from the building’s stairs and landed on the lawn below, making a beeline for the woods to the left of the large property.

He was twenty feet from the forest when the change hit him like a massive wave, crashing him to the ground. His muscles clenched and squeezed and tore, while the bones of his face continued to crack and grow. His teeth began to fall out in place of the monster’s. Down on all fours, he crawled to the tree cover and vomited. A mix of last night’s cafeteria meat loaf, black coffee, loose teeth, and blood splashed the ferns before him. Stan’s fingers extended as his claws dug into the soft soil of spring’s floor. He moaned and grunted his way through the rest of the fluid process.

In full beast mode, Stan Springs stood and howled at the cloud-covered sky. The creatures of the night became ghosts among the trees. He felt the strength flowing through him and the hunger begging to be sated.

He burst forward, headed north. Despite Stan’s best effort to control the beast’s killing zone, he found himself heading home.