ON THE LAKE - Guest Blog Post by Hunter Shea 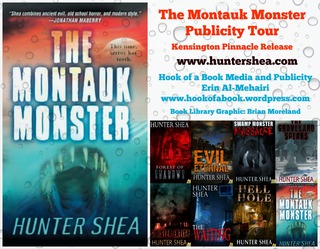 Buy THE MONTAUK MONSTER from Amazon.com
I’m sitting on a covered porch at this very moment, looking out at a still lake, its borders hugged by closely packed trees. A few birds chirp in the branches around me. There’s nary a ripple on the pristine water. It’s a sunny day with the promise of rising humidity.

My family and I will be plodding down to the water soon. At this particular spot, we’ll be the only people enjoying the lake, bobbing on rafts. The water by the shore is clear. We can see the sandy bottom and occasional fish dart by. But if we paddle out a little further, the water becomes impenetrable.

Out beyond the dock, the sand stops and the slimy muck begins. Treading water, you can’t see your knees, much less your toes.

And you wonder, what else is in the water, right now, just below my paddling feet? It’s a big lake. There aren’t many power boats. This is canoe country. Nature rules here. If your raft drifts into the center of the lake, you know you’re floating high above an unseen bottom that is deeper than you’d care to imagine.

Something splashes behind you. Your head jerks around, but you only see the widening rings of something’s dive into the depths. What the hell was that? It sounded big. Too big. You paddle fast, eyes fastened on the dock where your wife snoozes in the sun, unaware that something has risen up to view the lake’s interloper.

There’s that splash again, closer this time, following you. Your arms burn. Your heart trips and stumbles. A loon releases its ululating cry in the distance. At the moment, it sounds like a warning. Or is it cheering on the thing trailing you?

You want to cry out, but you can’t scare the kids. So you keep paddling, despite the cramp in your shoulder. You feel a thump under the raft that nearly jolts you into the air.

Stay calm. Keep paddling. Christ, what was that?

And suddenly, you can see the bottom again. Your daughters are playing Frisbee in the water. Your wife wakes up and asks, “You want another beer?”


Publisher’s Weekly named the upcoming thriller, THE MONTAUK MONSTER, one of the best summer books of 2014:

The urban mythologies of the Montauk Monster and the government labs on Plum Island unite to cause staggering levels of mayhem when mutant animals with toxic blood descend on a Long Island town. This wholly enthralling hulk of a summer beach read is redolent of sunscreen and nostalgia, recalling mass market horror tales of yore by John Saul, Dean Koontz, and Peter Benchley. — PW

On a hot summer night in Montauk, the bodies of two local bar patrons are discovered in the dunes, torn to shreds, their identities unrecognizable. . .

In another part of town, a woman's backyard is invaded by four terrifying creatures that defy any kind of description. What's clear is that they're hostile--and they're ravenous. . .

With every sunset the terror rises again, infecting residents with a virus no one can cure. The CDC can't help them;FEMA can't save them. But each savage attack brings Suffolk County Police Officer Gray Dalton one step closer to the shocking source of these unholy creations. Hidden on nearby Plum Island, a U.S. research facility has been running top-secret experiments. What they created was never meant to see the light of day. Now, a vacation paradise is going straight to hell.

"Hunter Shea is the real deal.. . .intense." --Gord Rollo, author of Valley of the Scarecrow and Crimson

"Shea delves deep into the unknown. A thrill-ride of a read!" --Alexandra Holzer, author of Growing Up Haunted

Called “Most Anticipated Summer Read of 2014” by The Horror Bookshelf along with Stephen King’s Mr. Mercedes and Brian Moreland’s The Vagrants.
Read More
Be the first to comment