The Mogwai – More Than Just a Gremlin! and La Llorona – The Weeping Woman 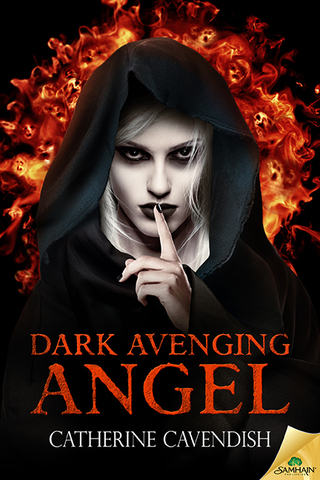 Dark Avenging Angel by Catherine Cavendish (Samhain Publishing)
My latest novella – Dark Avenging Angel – is, as its title suggests, concerned with revenge. In this case, revenge of the most demonic kind. We’ve all heard the old adage, “Be careful what you wish for…” Jane learns the truth of this in graphic ways.

Avenging angels and demons abound in the traditions and folklore of people all over the world. Today, I’m going to focus on just two of these, starting with the mogwai.

If you thought those cuddly, furry creatures who mustn’t see sunlight, get wet or be fed after midnight were just figments of Hollywood’s fevered imagination, then think again. Forget little Gizmo, think more of the evil Stripe and you are starting to hark back to the old Chinese legend of the mogwai.

Over the centuries, the term mogwai has come to refer to a breed of dead spirit which returns in order to wreak vengeance on any who have harmed it in life. Such vengeance can be of the most deadly and destructive kind and anyone who falls victim to a mogwai attack needs to think long and hard about who they might have hurt in the past. Getting rid of such a vengeful spirit is no simple affair, but burning (usually fake) banknotes seems to help. This gives the dead spirit money to fund their afterlife and entices them to move on and leave the world of the living behind.

In older Chinese tradition, mogwai were a breed of faerie folk with superpowers which they used to cause harm to humans. They were said to reproduce sexually during mating seasons which would be triggered by rainstorms. You can see where the film-makers got their ideas!

A sad story of revenge comes from a legend – retold in different versions – originating in Mexico.

Maria was a beautiful woman who drowned her children in a Mexican river as an act of revenge against her faithless husband who had left her for a younger woman. Her triumph – if any – was short-lived because, once she realized the horror of what she had done, she could not live with herself, so she drowned in a river in Mexico City.

At the gates of heaven she was challenged. Where were her children? She was told she could not move onto the afterlife until she found them, so now she is bound to the earth, endlessly searching for her missing infants. Her constant weeping gave her the name ‘La Llorona’. Her story is often cited as a salutary tale that parents will recount to their children to dissuade them from wandering off alone at night because, in her quest, La Llorona will sometimes kidnap any youngsters she finds alone. She begs forgiveness from her own children, but they never grant it. She then drowns those she has stolen in order that they might take the place of her own offspring, but that never happens. Her children are never restored to her and La Llorona is forced to continue her quest.

She appears late in the evening or night, emerging from lakes and rivers in Mexico. Some believe that anyone who hears her wails is marked for death. Her pitiful cries of, ‘Ay, mis hijos! (‘Oh, my children!’) are terrible to hear. It seems La Llorona is destined to walk this earth, trapped in a limbo between the living and the dead, for all eternity.

Now, to give you a taste of Dark Avenging Angel, here’s the blurb:

Don’t hurt Jane. You may live to regret it.

Bullied by her abusive father, Jane always felt different. Then the lonely child found a friend in a mysterious dark lady who offers her protection—a lady she calls her “angel”. But that protection carries a terrible price, one to be paid with the souls of those Jane chooses to suffer a hideous and eternal fate.

When Jane refuses to name another victim, the angel reveals her most terrifying side. Payment must be made in full—one way or the other.

And here’s a brief extract:

Something had woken me from a deep sleep troubled by my recurring nightmare in which I was in a wood, being chased by some unimaginable horror. I never saw its face, assuming it even had one. But I knew if I didn’t find sanctuary, it would kill me. I had just made it into the strange little house that always appeared in the clearing, when my eyes opened and I gasped at the white, smiling face looking down at me.

Oh, she looked the same. Same black cloak, but this time it shimmered and I wanted to touch it. I was sure it would feel soft as velvet under my fingers.

She put her finger to her lips and stroked my hair. Her touch was like a gentle breeze in summertime. My eyes wanted to close, but I forced them to stay open.

I knew I mustn’t speak out loud, but I could still whisper. “I wish I knew your name. Who are you? Please will you tell me?”

She continued to smile. Her lips moved, but the answering voice I heard was again in my head.

Do not be afraid, child. It is not yet time, but soon you will have the power to avenge yourself on those who have done you harm. Look for me in the shadows and I will be there, taking account.

I understood nothing of what she said. But, from somewhere, a calm I had never felt before emerged and wrapped itself around me.

I blinked in the darkness as she faded from sight.

Then I closed my eyes and slept. I never had that nightmare again after that night. But what if I’d known what was ahead for me?

Some things are better off left in the dark.

You can find Dark Avenging Angel (see links at left):

Following a varied career in sales, advertising and career guidance, Cat is now the full time author of a number of paranormal, ghostly and Gothic horror novels, novellas and short stories. She was the 2013 joint winner of the Samhain Gothic Horror Anthology Competition, with Linden Manor, which features in the anthology What Waits in the Shadows. Her novels, The Pendle Curse and Saving Grace Devine are also published by Samhain. Her latest novella – Dark Avenging Angel – will be followed by her next novel – The Devil’s Serenade – in April 2016

You can connect with Cat here:

Thank you so much for hosting me!

Missed your posts with you being at the horrorfest. What a come back this one is x