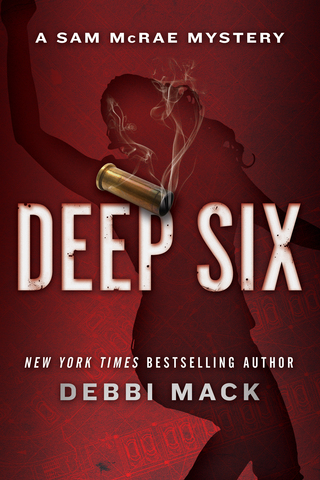 Deep Six by Debbi Mack
Thanks, Bill, for the opportunity to post on your blog!

I’m the author of the Sam McRae Mystery series. Sam is a lawyer in Maryland, who gets involved in solving murders connected with her cases. I tend to think of Sam as being like Kinsey Millhone as a lawyer. The genre is hardboiled, with a touch of noir to it.

My latest book in the series is Deep Six, a story that explores Sam’s personal relationships and delves into the subject of land use, local politics, and corruption. This was actually the first Sam McRae novel I wrote. However, after many failed attempts to attract the interest of a literary agent, I decided to write another novel. That novel was Identity Crisis, which was published by a small press that went out of business nine months after it came out. After years of writing more novels and failing to find representation, I decided to self-publish my out-of-print novel.

That may have been the best business decision I’ve ever made. Identity Crisis went on to become one of the first ebooks to hit the New York Times bestseller list in 2011. My second novel, Least Wanted, became a Kindle bestseller in the U.S. and the U.K.

The stories in Deep Six and my other novels have been informed by my experiences as a practicing attorney. None of the stories are true. However, I did work for a time at a law firm doing land use work. I also worked at the Office of General Counsel for the U.S. Environmental Protection Agency. It was while working at the latter that I envisioned the storyline and the protagonist, who I wanted to make a strong and capable, yet funny and vulnerable female attorney. My background in both the land use and environmental law field helped me develop the plot for my latest novel.

I’ve also released a boxed set of the first three novels in the series, Law Can Be Murder. Currently, I’m selling the boxed set for a bargain price, at least for a limited time.

Deep Six will be published on Wednesday, March 18, 2015. You can pre-order it now from Amazon, Kobo, Apple iBooks, and Smashwords.

Debbi is also a screenwriter and aspiring indie filmmaker. Her first screenplay has placed highly in both the Scriptapalooza and the Austin Film Festival screenwriting contests.

A former attorney, Debbi has also worked as a journalist, librarian, and freelance writer/researcher. She enjoys walking, cats, travel, movies, music, and espresso.

You can find Debbi online here: